After 1½ hour drive from Copenhagen down to the island of Møn, I parked my car in the parking area in front of the school at Elmelunde. I choose this location as it was central and easy to get back to by foot or bus. The walk south down to Råbylille Beach was about 4 km and on sealed road. Not that exciting but I wanted the car parked in the middle of the island. From here I hiked along the open beach for 5 km until I reached Klintholm Harbour. I filled my 2 ltr Evernew folding water bottle and made use of the public toilets at the harbour. From here it was a short 4 km walk to Mandemarke Haver where I made camp for the night. 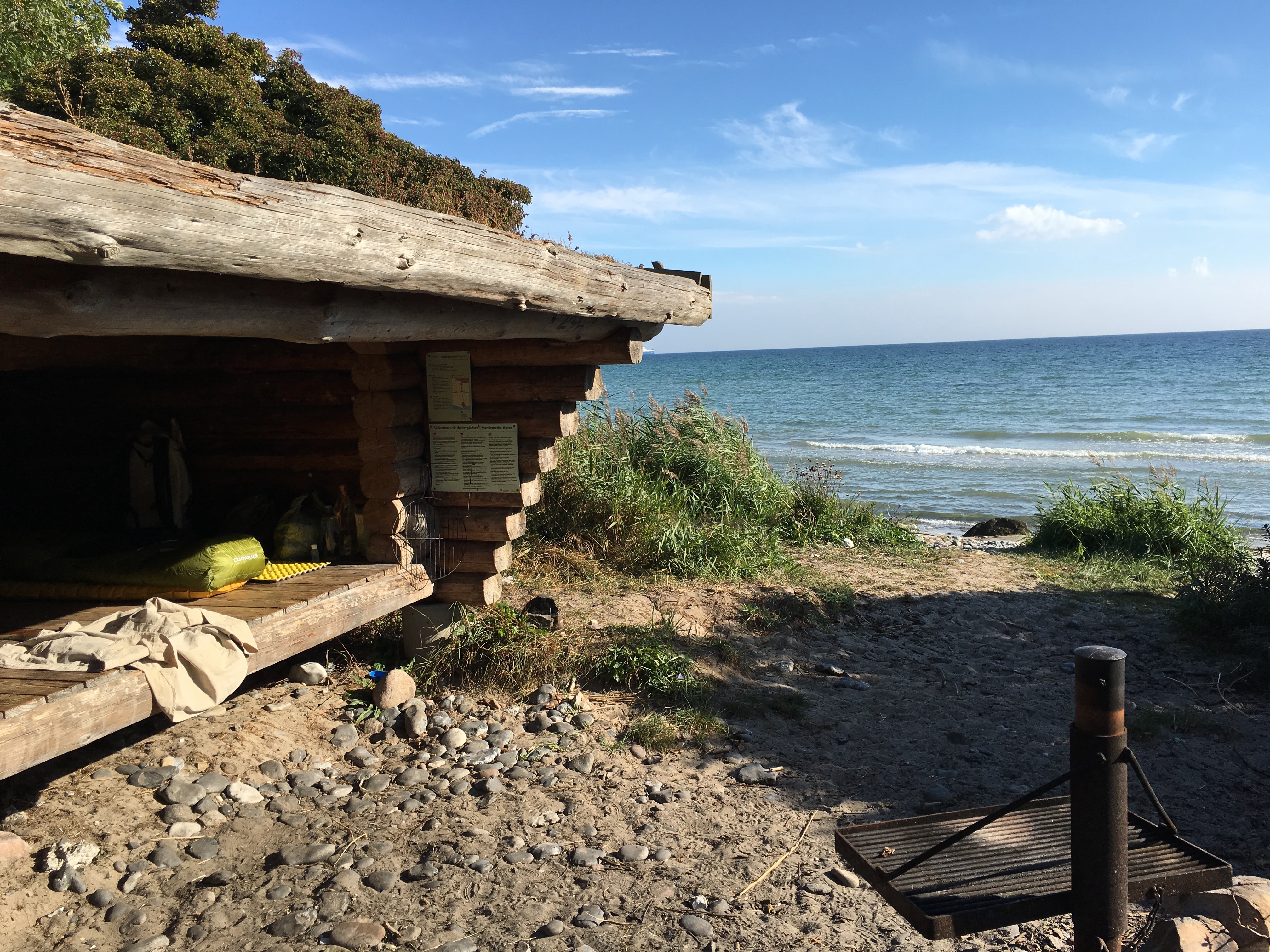 On arrival I noticed that there was not much room to pitch a tent in the designated shelter area and, as the 2 shelters were vacant and no one else was around, I decided to sleep in one of the 2 shelters for the night. The sun was beating down and it felt like summer again. I took some photos and paddled around a bit in the refreshing water. It was perfect I thought … too perfect! Not too long after 3 guys (car campers) turned up and said they will use the other shelter and that 2 more from their group will arrive later. Then a couple of German bike tourists arrived and then a couple more bikers. Time to leave I thought.

I packed my things and found a beautiful little camp spot for my Tarptent Notch. I had the area all to myself and had one of the best sleeps ever in the outdoors. I actually slept in to 7am which is not normal for me.

After my evening meal I went for a walk along the beach and watched the sun go down. It was truly beautiful.

Then I sat beside my tent and turned off my light. After a while my eyes adjusted to the dark and I actually could see for a few meters around me. I also had the continuing, comforting noise of the waves rolling in all the time as well. While I sat there I suddenly saw a couple of eyes in the dark. I turned on my light to see what it was and I am pretty sure that it was a hare.

I awoke to a beautiful Saturday morning with lots of sun. It didn’t take me long to eat breakfast and pack; I was ready to rock and roll at about 08:15 am. 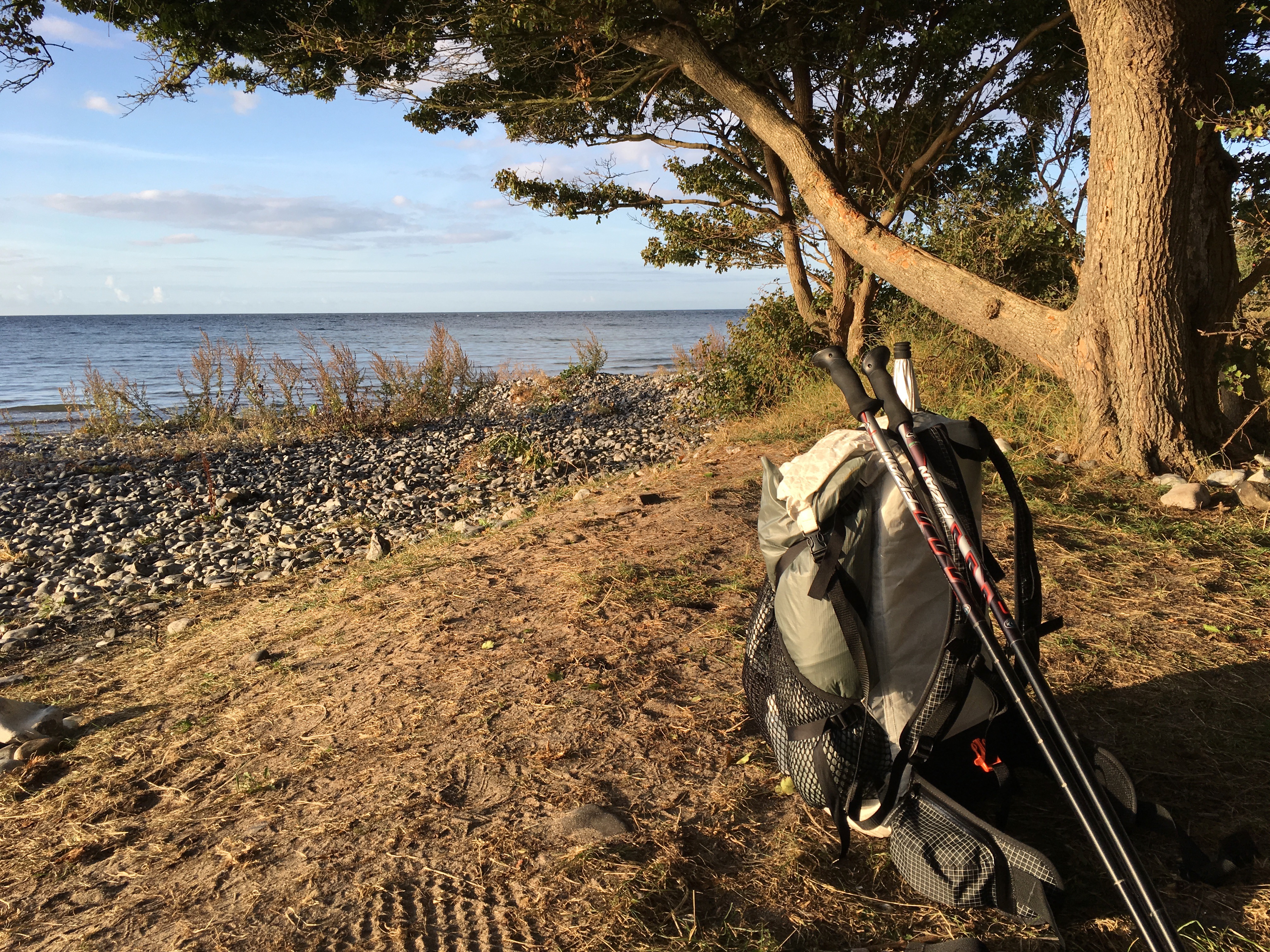 The trail I started on today is also part of The North Sea Trail and after a 2 km hike up the hillside I passed through the town of Busene before reaching the entrance to Klint forest Møns Cliff. Then came the highlight of my hike; the breath taking tall chalk cliffs of Møns Klint and the trail north through the old beech wood forest.

At Røde Udfald I took the staircase down the 130 meter drop and about 500 stairs. Here I took off my shoes and paddled around in the refreshing blue water. I also took the opportunity to take a food break and dry my socks and shirt in the sun.

I climbed the 500 or so stairs to the top of the cliff again and continued north along the trail until I reached the gardens at Liselund Castle. I found a vacant bench in the park and ate lunch here with a view of the castle.

It was my plan to overnight at a little area about 3 km from here. Although when I reached the site at around 2 pm I realized that it was a private forest and the site had permanent caravans on it; not my idea of camping site for the night. On the official “Camønoen” map it was marked as a “simple camping area” like the one the night before but without shelters. As there weren’t any other sites suitable in the immediate area, I decided to cut my trip short and walk the 9km back to the car at Elmelunde. I was home again in Copenhagen about 6:30 pm.