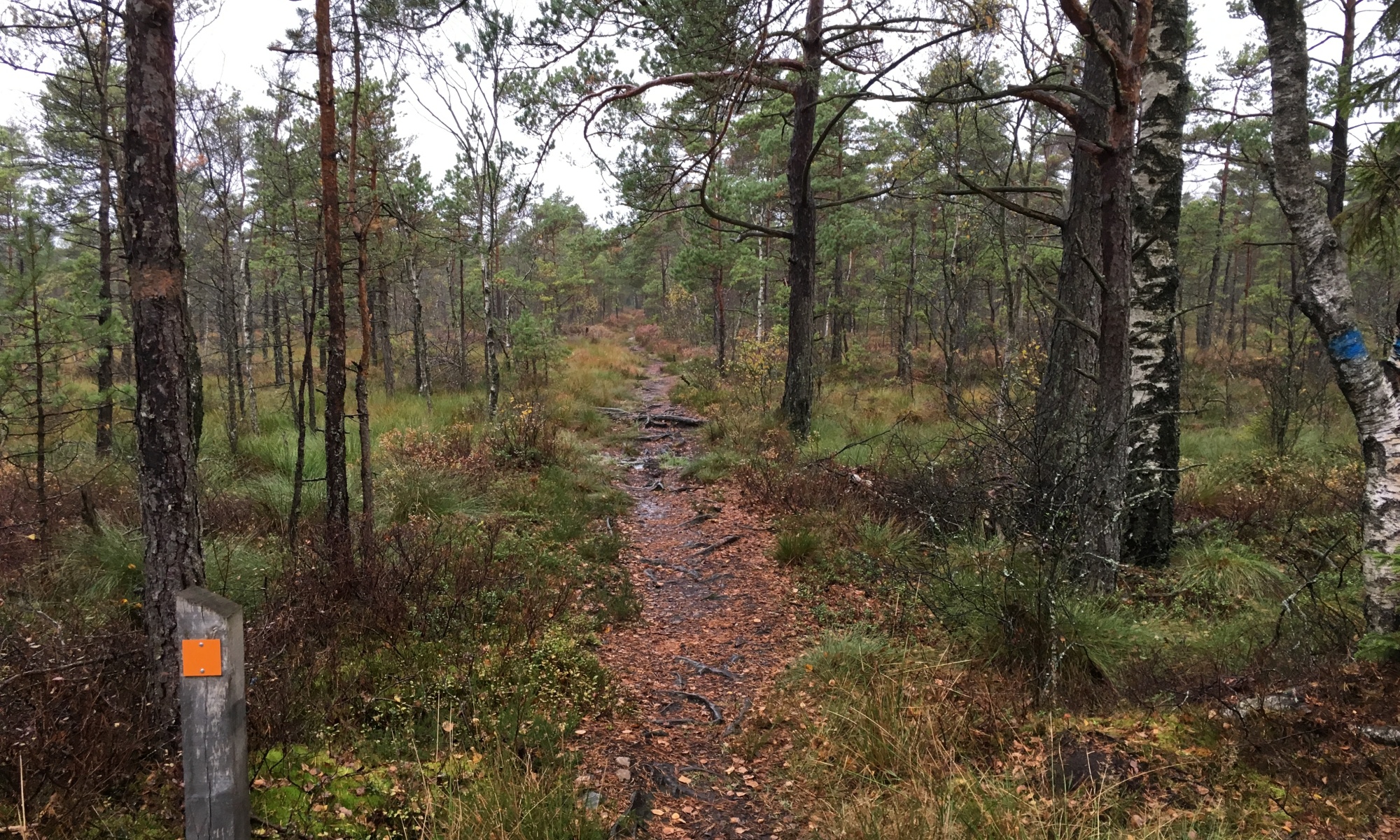 I had planned to walk both sections 8 and almost all of 9 on Saturday, so I thought it best to overnight at Osby on Friday night and then get an early start Saturday morning. This is where I got off trail last time.

I arrived at Osby train station at approximately 5 pm after leaving work early, racing home, change clothes, collect my packed gear, and catch the 03:05 pm train from Copenhagen central. About 100 m from the Osby train station is Stora Hotel. This would be home for the night. It was a bit strange because I have never done this before on one of my trips. But with the distance I needed to cover the next day and the fading light for this time of the year, I thought that this was my best option. Next door, at the ICA, I purchased a meal prepared that day and took it back to the hotel, where on the 2nd floor, I used the kitchen’s microwave oven to heat my meal. I hit the sack early.

I awoke to a dark and wet morning; this was not the weather forecast I got! No problem, this is what it is all about. I was down at the bistro when it opened at 8 AM. I made sure that I ate a full breakfast that would keep me going for most of the morning. It was going to be a long and hard day.

At 08:40 am I set out on section 8 from Osby. It was easy to find the trail with the distinct orange blazers.

I walked from the start through a couple kilometres of swamp area and at some stage I came across this huge stone. Kristusstenen (The Christ Stone). Legend has it that this is the place where the Viking chief called Ilje died when he was struck by lightning which also split the boulder. Look into the cleft, the inside of the stone is shaped like a Jesus figure tied to a crucifix.

I continued through the wetlands along gravel roads through spruce plantations. I thought that I should mention here that at Hörlinge you have to pay particularly good attention, because the trail takes a sharp right and it is very poorly marked. There are no signs pointing you in the right direction and for a while, there are no trail blazers, indicating that you are on the right track. So you have to pay attention to your map.

For a while the trail followed Helge River.

I passed through Verum where I looked for water in the church grounds there. Unfortunately all the taps had a sign placed near them saying that the water was not drinking water. About 2 kilometres from Verum the shelter area is located. There is a water source there, but I would not advise to use it as the area is heavily used by cattle. I would suggest to filter water from the Helge River, which is the half way mark on section 8, if you need to fill up. I had a 15 minute lunch break at the shelter. It was great to get out of the rain for a while. Luckily the temperature was a warm 15 or 16 ℃, so it was actually quite pleasant sitting in the shelter.

After lunch, I started section 9 Verum – Vittsjö. Although I would stop short today and camp at the lake at Vittsjö. I didn’t get any more photos taken on this section; I was concentrating on making it to my planned site for the night and the rain actually really started to come down and the wind was getting up too.

I had hiked all day in wind and rain and I finally reached my planned site for the night after 33 km only to find that the area was already occupied. I was on the nature reserve here and you are only allowed to camp at the designated sites. The official site had been “overtaken” by 4 or 5 guys that had rode their motor-cross bikes in on the trail and hung tarps up etc. completely using the whole area and with motorbikes parked where it was meant for tents to be pitched. It looked like a large army style base camp. I was hoping that the shelter wouldn’t be occupied because it was not easily accessible for “car campers” when I looked at the map. I hadn’t thought of this possibility. This, I believe, is not allowed and is a selfish act.

As I was on foot, it was approaching dark, and I was very tired after hiking many kilometres through bad weather all day, I had no choice but to find another place to pitch my shelter. So I continued along the trail a while and then headed into the forest looking for a good spot. Then I realised that I was on an old unused trail. Soon it ended and I found this flat spot. This site was actually on the “back side” of the official shelter site. Although, I did my best as not to camp too far from the official site, and I could still see it from mine. I am a strong believer in doing the “right thing” and “leave no trace” is also important to me. I’m one of these crazy guys that sort the garbage at home and go mad at the rest of the family if they don’t put things in the correct bins etc.

It rained all night but I slept like a baby. I was pretty happy with the pitch too and I blended right in so no one really knew that I was there.

I awoke early and as soon as it was light. It had stopped raining now, although there were still dark cloudy skies. I was at the train station at Vittsjö at 09:00 am. Unfortunately the train had already been by 15 minutes before and I had to wait for two hours before the next train arrived. I guess I should have consulted the train plan the night before. I’m used to trains at least every 20 minutes at home and most of the places here in Skåne they come by every hour. But this place was in the middle of nowhere. I arrived home in Copenhagen around 2 PM.