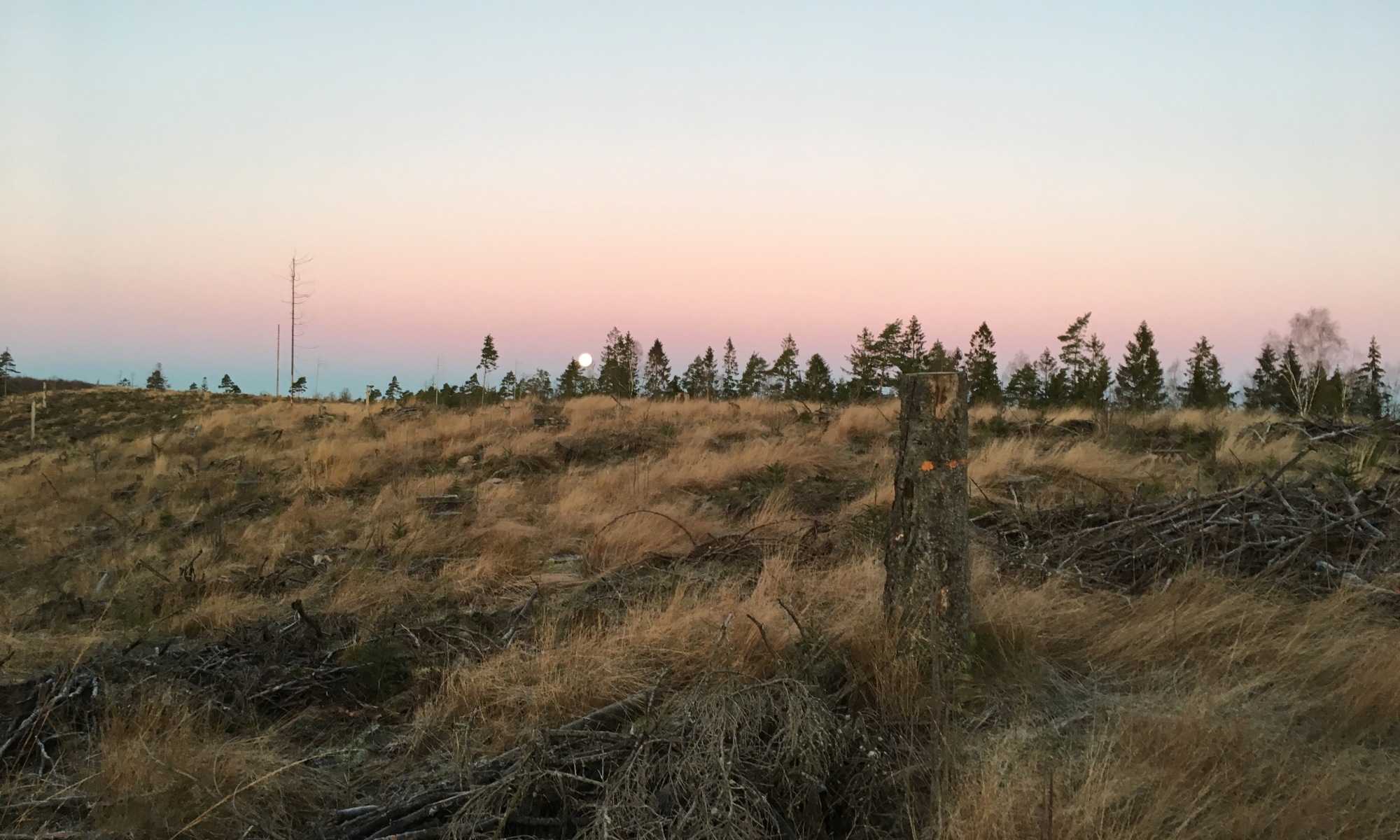 My first “winter trip” for the season which consisted of a three day hike from Åsljunga to Båstad in Sweden. Total distance 53 km.

After the 1½ hour train ride from Copenhagen, I caught a bus from Helsingborg in Sweden to Örkelljunga and finally another bus to Åsljunga (Åsljunga Landshövdingevägen), where I alighted at 11:09 AM. I departed home at 07:15 AM so the journey took nearly 4 hours.

My destination for today was Bjärabygget shelter area. Not long after my arrival at the Åsljunga bus stop (Åsljunga Landshövdingevägen), I was quickly on the trail and began the climb up to the look-out point at Åsljungagården. It was windy and cold and, for at least today, there was no rain.

I was taking my time and trying to take in all the sights as I only had to cover a short distance today. After my descent from the look-out point, the area completely changed. I soon found myself in a bog with a long boardwalk which seemed to go on and on, it was at least two kilometres in length. It was also very, very slippery! The bog was also very water trenched so if you want to do this section at this time of the year you will get wet feet!

I walked for about 7 km today and arrived at the Bjärabygget shelter area to find that there was no possible way to erect my shelter anywhere, maybe in front of the toilet, so I was forced to sleep in the shelter for the night. I am not a “shelter sleeper” fan. I quickly made myself comfortable and made a cup of coffee before dinner. It was still reasonably early. Soon it began to rain and then some snow (the first snow for me for the season). Although it did not snow for long.

Not long after that a Danish hiker, Claus, came by and rested for a bit before moving on again. We talked about gear, what else to hikers talk about? He had 20 kg on his back which amazed me. I told him that my base weight for this trip was 6.5 kg. He was shocked and I grinned a little.

It stormed and rained through the night. A little rain also blew in and my sleeping bag and gear were slightly damp. It continued to rain all morning and stopped around 1 pm in the afternoon. It was pretty tough going with the elevations I passed up and over with the rain coming down. The ground was already wet enough but with the rain, some areas were turning into a water course. On my way down from Snibe Stuga, (the cave called Snibe Stuga was said to have been home to a female giant and more recently a soldier during the war in Skåne), I slipped and fell hurting my elbow and hip. The trail was very muddy and water logged.

After my descent of Snibe Stuga I soon found myself on the southern slopes of the Hallandsåsen ridge. It was a little magical as the rain stopped and I was presented with some nice views.

I had a feeling that I should stop and filter some water as I wasn’t sure that there was water available this time of the year at the Koarp shelter, which was my destination for today. My feelings were confirmed on arrival as there was actually a tap there but it was turned off for the season. And just like the day before there was no place for my shelter, so it was “shelter accommodation” for the night again. There are actually two shelters as the Skåneleden Trail merges with the Hallandsleden Trail here at Koarp and I presume that in the summer period they would be used often.

I slept well and woke early. The temperature was minus 2℃. I quickly ate breakfast and packed so I could get on the trail before sunrise. My rewards were plenty. It was a beautiful morning and I witnessed one of those “once in a lifetime” moments.

The temperatures only warmed up to about 2℃ the whole day. I had about 27 km to cover today, as I needed to get a train from Båstad, so I kept up a nice pace all day. And with the cold weather I had perfect conditions. Section 14 from Koarp to Brammarp starts off easy with forest roads at least half of the distance. This soon turns into a “water adventure” once again! The trail passes through a wetlands area and you will get wet feet here. I arrived at the trail head at Brammarp around lunch time and still had about 10 km to cover to get to Båstad.

I arrived at the train station, which is actually several kilometres from Båstad, before 3 pm and my train to Copenhagen departed at 15:32 pm.