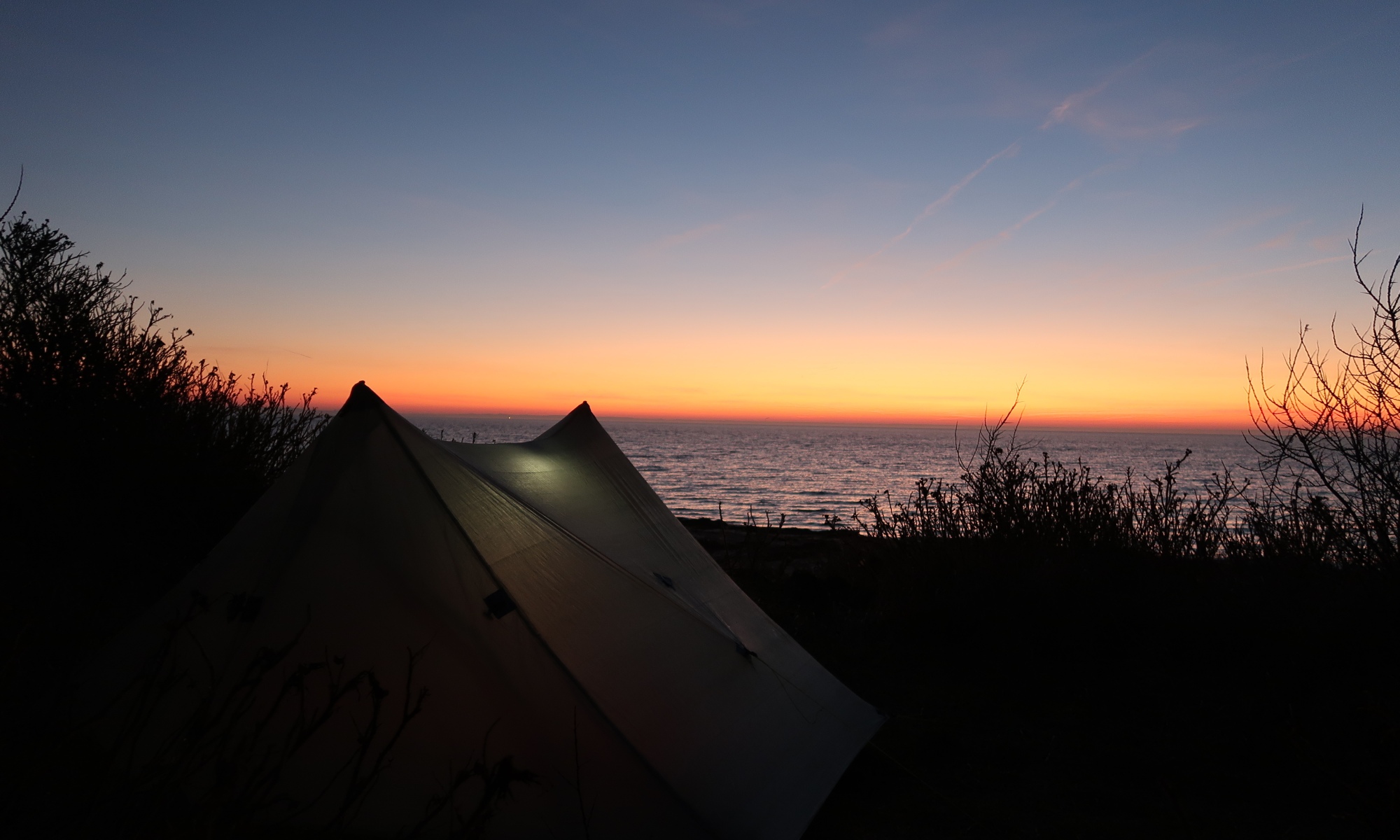 Continuing from where I finished off last year at Höganäs I hiked sections 5, 6, 7 & 8 to Landskrona and covered about 58 km. I also completed the Kullaleden Trail on this adventure. It is one 70 km section of the Skåneleden trail SL 5 around the Kullahalvön Peninsula.

I boarded a local train at 9 am bound for Copenhagen central station. At 10:27 am the train departed the busy central area heading for Sweden. I arrived at Höganäs just before lunch time. Höganäs is nationally known for its ceramics industry, Höganäs Keramik. Landskrona is a late medieval town in Scania province, located at the shores of Sound which forms the Danish-Swedish border (Øresund).

It was around 3 or 4℃ and with the icy winds blowing across the Sound from Denmark I froze. I wore my usual three layers but within an hour or so I was forced to additionally add my rain jacket as a 4th layer before I was warm enough. This helped tremendously and I protected my head with the rain jacket hood too even though I already had my cap and two hoody covers on which was not enough. I also had my long underwear on under my trousers and thought about putting on my rain pants too. But I soldiered on and eventually I warmed up.

To make matters worse there was no sun to warm things up and a thick mist hung over me the whole day. There was even a very slight drizzle of rain too. Great weather for ducks.

At around 16:00 pm I arrived at Domsten. The map shows that here there is a shelter, toilet and water. However the drinking water was turned off for the winter season. The water in the restroom was heated and only suitable for washing hands with and flushing the toilet so there was none available for normal drinking purposes. I am always prepared for these situations and had packed a couple of liters.

I found a suitable site to pitch my shelter and eventually had it up. My hands were quite cold and it was difficult to work with them. The soil was also very sandy and my tent stakes came out easily. I had to find some rocks to keep them in place.

I made a cup of tea and sat in the shelter protected from the winds. I was soon warmer and in good spirits again. Sunset was around 17:30 pm and around 18:00 pm I started to prepare dinner. Tonight’s menu was one of my homemade dehydrated meals: Tuna, vegetables, rice with broccoli and cauliflower white sauce. I packed my Vargo BOT – 700 for this hike as I was still testing it to decide if I want to take it to Lapland later this year or not. I was using it together with a Soto Windmaster stove including the TriFlex pot support. More on my findings later.

After dinner I relaxed with some whisky and chocolate. I conducted a little photo session after that before retiring to bed. The photo below was taken looking over towards Denmark where you can see some lights in the background shining from the Danish shoreline.

Today started out with similar weather although I didn’t require the rain jacket this time and at lunch time the weather changed for the better, much better. Only three layers were needed to start with and later when the sun appeared I stripped down to two. The photo below was taken around 9 am and after walking for an hour or so. The winds had dropped considerably today too.

Just before midday I arrived in Helsingborg. It took me about two and half hours to walk through the city. By this stage the skies were now a beautiful blue and the sun was shinning. I found the Kullaleden sign which marked the start or finish of the 70 km long trail. I have now completed the Kullaleden Trail! 🙌 It is one 70 km section of the Skåneleden trail SL 5 around the Kullahalvön Peninsula.

Just before Rydebäck beach the trail joins the coastline again. The wind is only blowing 2 or 3 m/s now and the sun has now burnt off all the morning mist and fog. I decide to take a break on the beach. I find out later that the jetty that you can see in the picture below is not far from where I camped for the night.

Between 16:30 – 17:00 pm I arrived at camp two. At Rydebäck there is also a shelter but the locals use the location to BAR-B-Q and party around a campfire. I backtracked and located a perfect site for my Duplex 200 meters north of the shelter right on the beach. A nice little grassed area where there was evidence that others had used the site before me in the form of a tent stake left behind in the grass.

Just in the nick of time I managed to have my shelter erected and soon after I could sit and watch the sunset on the horizon over the Sound towards Denmark. What a beautiful sight that rolled out before my eyes. One of the most gorgeous sunsets I have ever witnessed.

I prepared dinner and continued to watch the spectacle folding out before me. Tonight’s menu was Chilli con carne beef, vegetables and rice (homemade of course). I had walked about 30 km today and was nearly ready for bed but first I indulged in a little photography again this time looking up towards the stars.

It is not always possible to sleep with any storm doors open on my Duplex. For example sites in public locations. At this location, where the trail followed the coastline, my camp was right on or next to the beach and close to an accessible public area. There were many locals who were walking their dogs etc and all hours of the night too BTW. So I didn’t want to leave any doors open. With stars and the moon shining there was no cloud cover. The temperatures dived to just around zero ℃ and when I got up the next morning there was a thin layer of ice on the canopy. In the early hours of the morning I could feel some drops of water on my head. My body heat was enough to warm the Duplex and with the ice on the canopy condensation began to form on the inside of the shelter. A fair bit actually. Most of it just dripped off the end of the fly and onto the ground, which is how it is designed to function. But where the elastic cords hang from the bottom side of the fly wall pull-outs the condensation hit the cord and then dripped off it and onto my head. This is not the first time that I have experienced this. On most nights I’ll choose a location near and under some trees for some cover and away from a water source. This helps a lot.

I was out of my warm quilt before the sun was up. I packed my kit down and into my backpack and then quickly stored my shelter in the outside net of the pack. The Duplex still contained some ice on it and as I was heading home today I didn’t worry too much about it, but before long the ice would melt and so I didn’t want moisture everywhere inside my pack.

I found a suitable location where I could consume breakfast and watch the sunrise. On day one the Vargo BOT – 700 preformed well. I boiled some water for tea and coffee and warmed my dinner after soaking. One disadvantage when using the gas is that you have to give all your attention to the exercise at hand. You can’t just turn on the gas and relax, you have to stir the food all the time and control the amount of flame. With my alcohol stove setups you can basically give the food a stir once in a while and chill. On the second night things went well too although I had to keep an eye on the flame all the time and stir.

However, today at breakfast time I decided to just heat my oats slightly to take the chill off; it was quite a cold morning. I had my eyes off the heating process for just a short while and this was enough to burn my food. I looked in the bottom of the BOT and the whole base was covered in a black, burnt food mass. I was not a happy boy. Luckily it was the last day and I was heading home so I cleaned it as best I could and packed it away. But this was good that this happened; I don’t think that I want to pack this pot on my Swedish Lapland trip coming up later this year now.

The first hour while hiking it was freezing and even with gloves on my finger tips were numb. After an hour or so I warmed up. As I headed south towards Landskrona I had the Island of Ven out on my right. It is situated in the middle of the Sound between Denmark and Sweden. Ven is also one section of Skåneleden SL5.

The trail continued to follow the coastline and this section of the trail, not far from Lanskrona, was also well used by the locals out for a run or just walking. Once I made it to the city center I changed my direction heading inland or west towards the train station. I arrived twenty minutes or so before the train arrived so I had some time to organise my ticket and visit the men’s room. The train departed at 12:22 pm and a couple of hours later I was home.

Disclosure:
Product(s) discussed in this article were purchased by myself from a retailer or manufacturer. I do not accept compensation or donated product in exchange for guaranteed media placement or product review coverage without clearly denoting such coverage as an “ADVERTISEMENT” or “SPONSORED CONTENT.”