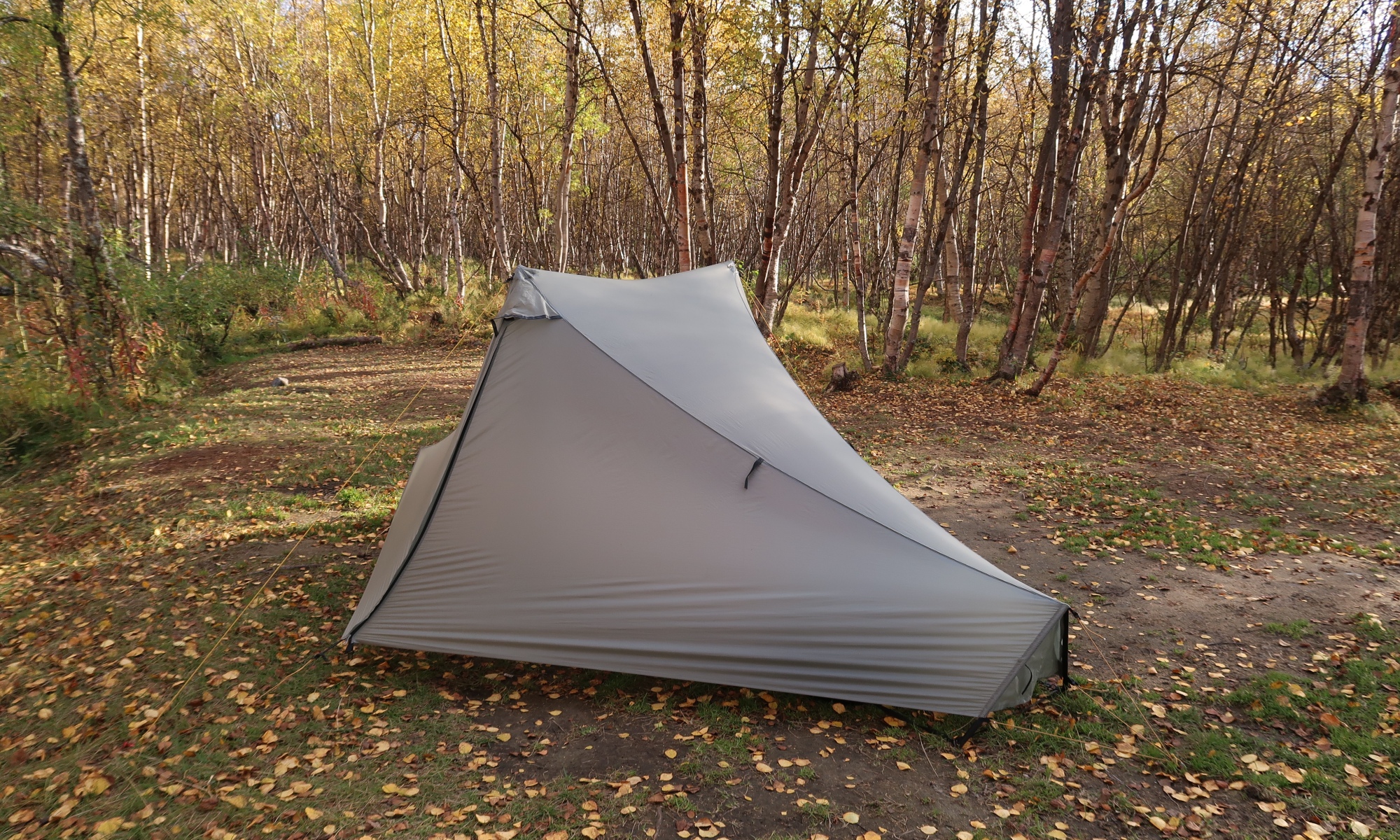 When I was up earlier to visit the little house the weather was still fine. However, it was raining when I woke the second time. I could hear voices coming from the other hikers who were already out of bed. They were talking amongst themselves whilst gathered around a fire place where they had placed their small stoves to make their morning coffees. I was in no rush. From home I had booked a train ticket for this afternoon departing Abisko at 16:38 pm. If I couldn’t catch any other form for transport then I had this to fall back on. It only cost me SEK 65.00 so if I could get something earlier then I could cope with the loss. I purchased a non-refundable ticket.

The task of packing my backpack was preformed from inside my shelter so that everything was stowed away dry. When the job was completed I packed down my Tarptent Notch. The skies cleared slightly while I took it down which was nice. I stuffed my tent into a side net pocket. I would dry it later in the afternoon when I reached my hotel.

When I walked to the kitchen lean-to the rain started again. The shelter was filled up with hikers finding refuge from the weather. There is always room for one more isn’t there? At least that is what I said to them and they made room for me, thanks guys 😀.

Both Esse and Tom were there and we said good morning to each other. There were also other hikers cramped into the small space. They were all busy consuming breakfast and packing so they could start their hiking day. I got talking to a couple of Swedish guys who were just starting out; they had come in the previous evening from Abisko. They told me that a bus would be departing Abisko at 11:10 am passing through Kiruna which is where my hotel was located. This was great news; I downed my breakfast and skipped my coffee and got on my way. When I started out the skies opened up again and the rain only got heavier throughout the day. I had less than 5 km to Abisko.

I followed the river Abiskojåkka which ends its journey into lake Torne. Torneträsk or Torne träsk is a lake. Träsk is the local word for lake. It is the sixth largest lake in Sweden, with a total area of 330 square kilometres and a length of 70 kilometres.

When I reached Abisko I could then get service on my mobile. I checked the Länstrafiken i Norrbotten AB website and the guys were spot on. A bus was departing at 11:10 am and would stop at Kiruna bus station at 12:30 pm. My reservation at the hotel was from 15:00 pm so I would take a chance and see if my room was ready. I had an hour to kill so I purchased a cup of coffee and some carrot cake in the store at the Abisko Mountain Hut. First, I went up to the reception and delivered the mail that I had carried from Alesjaure Mountain Hut. They thanked me for my services and confirmed that a bus would come by in an hour and that I was welcome to relax in the reception area until it came. I drank my coffee and caught up on news and social media events after being 7 days in the mountains without internet. I posted the below on Instagram.

The bus came about 5 minutes late. On the bus I got chatting to a senior Swedish man who was together with his wife. They had spent the last 7 days at Abisko doing some day hikes. He had just had a hip replacement operation done and the doctors said that he should exercise it already. He had some trekking poles with him that were actually the same as mine; some Black Diamond Distance FLZ trekking poles. He was having trouble trying to collapse them so I spent the rest of the journey giving him some lessons. Consequently I didn’t get to look around and enjoy the scenery. I didn’t mind though as he was a nice guy and we chatted for a while after the lessons.

While I was in Abisko I cancelled my ticket so someone else could use the seat on the train. We arrived in Kiruna around 12:35 pm. I was here in 2018 and so I knew where to go as I had also booked the same hotel. Unfortunately my room was not ready and they said that I would have to wait until 15:00 pm. So what does one do? I went for a walk in the ghost town after locking my backpack up in the luggage room at the hotel. I write ghost town because they are re-locating this whole town as it is sinking because of the mining being done. The shaft where they mine for iron ore runs diagonally under the town. By year 2035 the re-location process will be complete. It is a huge project.

Back at the hotel I was forced to drink beer while waiting for my room to be cleaned and made ready. Once I moved into my room I could officially call myself “Hiker Trash” placing all my belongings all over the place to dry and air out.

The view from my hotel room was spectacular. Last year I had a room on the opposite side with boring views of the ghost town. Below you can see the world’s largest, most modern underground iron ore mine with glorious mountain views in the background. I caught my last glimpse of the mountains from the window of my hotel room below.

Next day I checked out of my hotel and travelled by taxi to the airport where I flew from Kiruna to Stockholm and then to Copenhagen. I was home at 16:40 pm.

You can view and downloaded my map here on AllTrails