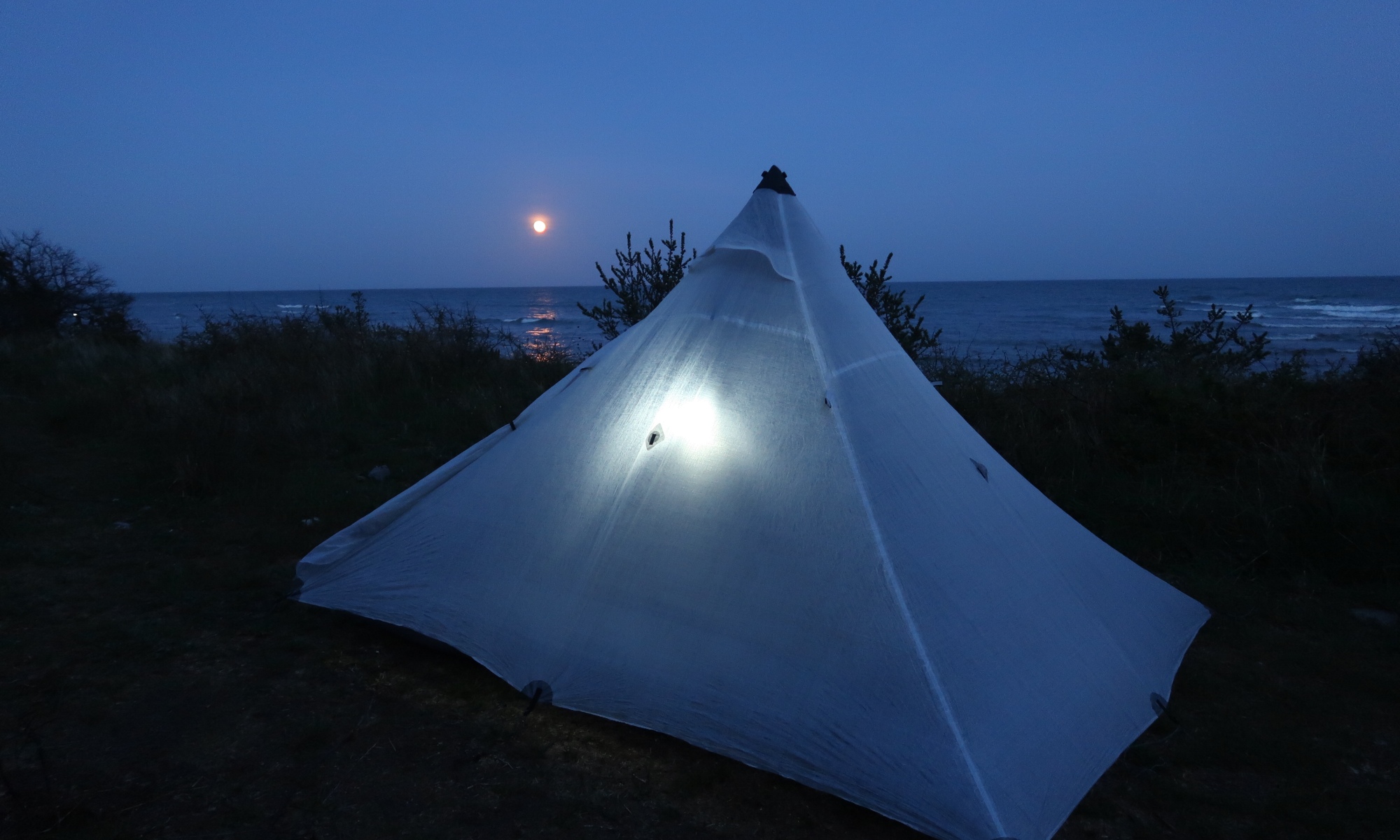 The name Camønoen is inspired by the Camino de Santiago, which is an ancient pilgrimage route to the shrine of the apostle Saint James in the cathedral of Santiago de Compostela in Galicia in northwestern Spain. On Møn, Nyord and Bogø islands the Camønoen consists of 10 stages with a total length of 174 kilometers.

Please see my post here for more information about the Camøno.

I departed work at 15:00 pm, drove home, took a quick shower and then continued the drive down to Møn arriving at Busene Have just after 18:10 pm located on the south-east tip of the island. The wind was blowing somewhere around 7 to 8 m/s from the west and the temperature was approx. 14 °C, although it did not feel cold. I stripped down to one layer and began setting up camp. This is not the start of stage one but I knew this site well and my chances to be alone were high.

In early March this year I visited and camped at the same campsite as I did on this adventure. My Møn & Camønoen map from Calazo published in April 2019 clearly shows that Busene Have is a fri teltningsområde (wild camping allowed area). See the image below. Calazo collected the data from the Danish authorities in January 2019 according to the small print at the bottom of the legend on my map.

However, the latest update from Naturstyrelsen (The Danish Nature Agency) dated May 6, 2020, does not include Busene Have as a fri teltningsområde (wild camping allowed area) any more 😢. See page 7 on the downloadable PDF below. Busene Have is now omitted from the list.

This is a real blow. The site is a great location with fantastic views of the Baltic Sea and I have experienced some beautiful sunsets and sunrises here too. So please don’t take my example and use this site thinking that wild camping is allowed as it seems now that it is no longer on the list. I’m really not sure when it was taken off the list but I can only assume that it was still on there in January 2019 as that was when Calazo collected the data necessary to produce their map. It appears that the change has been this year in May 2020 or it could’ve been in May 2019. I haven’t downloaded the “Oversigt over skove mv. med Fri Teltning” (wild camping forests) PDF from Naturstyrelsen (The Danish Nature Agency) in 2019 and it doesn’t seem to be available for viewing any more, so I can’t confirm this.

With the COVID-19 crisis there will be no flying to other countries in the summer of 2020 for me. As a family we like to travel south for vacation at least once a year. This year will be very different indeed. That’s why I have packed the full insert and the Hyperlite Mountain Gear Ultamid 2 on this trip. I don’t have to carry any gear either as the two Camøno stages that I will be walking in the morning are a circular trail and I will be able to park the car at the trail head. I’m tossing up the idea of walking a trail in Jutland (Denmark) that is 74 km in length together with my wife this summer. This is where the full insert comes in. I purchased the inner tent last year but I have never used it before. I’m certain now that it’ll be fine for both of us to use. I certainly appreciated the space anyway; it was like being in my Zpacks Duplex, which I regard as a palace for one person. One person will be able to carry the Ultamid 2 which weighs 528 grams and the other person can store the full insert which weighs 622 grams. We’ll use trekking poles (2 uses) to support the shelter, and we’ll have some lightweight tent stakes with us too.

After the Ultamid was arranged I began soaking my food. My kitchen was the Vargo BOT-700 and the Stormin Stove Systems Pothugger windshield, and of course a reflective baseplate in aluminium (leave no trace) and my DIY pot cozy. Dinner was one of my home-made dehydrated meals of chicken, vegetables, lentils and spices. All this was followed by a cup of coffee accompanied by some chocolate.

While I was organizing dinner a girl showed up. She had been hiking all day with a friend, but the friend had gone home. She did try to use the shelters less than a kilometre away further west at Mandemarke Haver, but they were occupied. This did not surprise me; they are frequently used and are very popular. I told her that it was fine with me that she pitched her shelter not far from mine, although far enough away that we both could still enjoy our outdoors experience. We chatted briefly before and after dinner and watched the changing colour in the distant horizon as the sun set in the west.

She retired to bed while I stayed up and took a series of night shots with my Canon PowerShot G7 X Mark II camera. The moon was out in its full glory with moonshine on the Baltic Sea behind my shelter. Below the moon to the left (in the image below) there were two fishermen in the water. When I checked the water temperature the next morning it was surprisingly warm. Both fishermen had waders on of course.

I had to get up at 04:00 am to take a pee. I was also cold. The weather forecast said 7-8 °C for night temperatures but I’m sure that it got down to around 3 or 4 °C. With the full moon I didn’t need the use of my headlamp, but the skies are different down here anyway, there was a lot of light. When I returned to bed I added my Cumulus Climalite Pullover for a third layer. I already had on my merino wool long underwear and my Patagonia Capilene Air Hoody (2nd layer). By supplementing my sleep system with my pullover (3rd layer) I was able to sleep comfortably again. I had packed my Cumulus 250 quilt thinking that it would not be so cold through the night. In hindsight, I should’ve taken my trusty AS Tucas 450 quilt, but you live and learn.

After breakfast followed by my morning coffee I packed camp down and then drove the short distance to the western end of the island. I parked the car at Mosehældgård which is situated in the Udby Skov (forest) wild camping area. Here there are 2 shelters, a composting toilet and there is a tap where you can collect water from. You may also pitch a tent and there is enough room for about 20 people plus the folks sleeping in the shelters.

This is stage one of the Camømo trail although it actually starts in Stege at Møns Museum. I wanted to be able to park my car and return to it so this hike is my own interpretation of the stage.

At 09:30 am I set out from Mosehældgård. The trail takes you first on sealed roads heading north towards Nyord. I walk through typical Danish summer style countryside including yellow rapeseed fields and wind turbines in the background.

Soon I had a view of Hegnede Bugt (bay) and then towards Ulvshale with meadows, heath and the forest called Hegnede Skov which is the second remaining wild camping allowed area on Møn island. Before reaching Ulvshale the trail takes me through the south side of Ulvshale Skov (forest) until I reach the one lane bridge.

Following the bridge over the Ulvshale Løb (channel), the Camøno trail then took me out on to Nyord Enge (meadow), which is among the country’s finest bird areas. In the middle of Nyord is a two-storey bird watching tower.

I stopped for a lunch break when I arrived at the end of stage one at Nyord Kirke (church). The octagonal church is from 1846. It is a pilgrim church and here you are supposed to leave all your worries behind you when you place the juniper berry that you plucked out on Ulvshale heath in the little glass near the baptismal font.

This stage should actually finish at Pension Elmehøj but because I was walking a circular route I finished short at Mosehældgård where my car was parked.

After lunch, I continued back the way that I came from over the bridge heading east towards Møn again. Even though I hadn’t placed a juniper berry in the glass I still felt like I didn’t have a worry in the world at that point in time. There were no clouds in the sky and it had warmed up now to around 18 ℃. I rolled up my trousers legs and arm sleeves drawing in the suns spring warmth; it felt a little like summer already 😎.

The first part of the second stage, after walking over the bridge on Ulvshale Løb (channel), follows a trail on the north side of Ulvshale Skov (forest). Before lunch, I had walked on the south side hiking west. Then it heads, first south and then east again through the fairytale forest.

Ulvshale Skov (forest) is like no other Danish forest. The fallen trees, the uneven rocky forest floor, the small water holes and the many species of plant life give the forest its own distinctive character.

Exiting the forest I feel like I’m walking into an area that one would find on an island in Southern Europe somewhere. Wow, this is nice 👌. First, I pass Ulvshale Camping and then I make my way out to Ulvshale Strand (beach). Here there are long white sandy beaches and the water has a beautiful turquoise colour to it. I follow the beach for a couple of kilometres before I have to turn heading in a southern direction. I walk on the northern side of Hegnede Skov (forest) trying to see if there are any possibilities for a wild camp there on a future hike. It looked fairly overgrown and there is a lot of thick brush but I think I eyed some scattered areas where one could pitch a tent.

Soon I’m back at Udby Skov (forest) on the east side, and so I hang a right and walk 400 meters on the road until I see a track that runs through the forest ending at Mosehældgård where the car is parked. There is probably 800 meters or so and then my hike is over. I have walked 25 KM today.

My intentions were to camp at Mosehældgård for the night but there were too many people there. With the COVID-19 restrictions going on I decided the best thing to do was to head home, so that is what I did.

Disclosure:
Product(s) discussed in this article were purchased by myself from a retailer or manufacturer. I do not accept compensation or donated product in exchange for guaranteed media placement or product review coverage without clearly denoting such coverage as an “ADVERTISEMENT” or “SPONSORED CONTENT.”